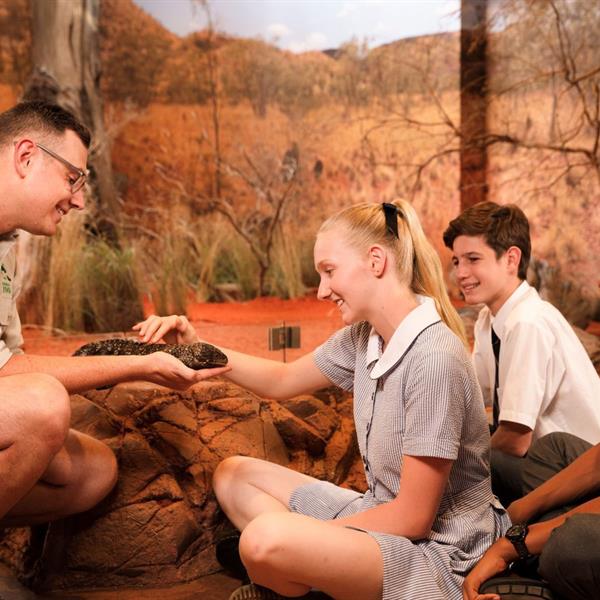 The Australian Museum, Taronga Zoo and Royal Botanic Gardens are proud to present a new virtual excursion for Stage 6 Module 3: Biological Diversity. Join us live online for three hours across a day to examine fossils, specimens, live animals and plants to understand biological diversity by explaining the relationships between a range of organisms in terms of specialisation for selected habitats and evolution of species.This engaging program has been designed to replace the popular Evolution of Australian Biota study days.

BROUGHT TO YOU BY:
Australian Museum

Requirements for this excursion

To connect your classroom you will need:

* A reliable internet connection* A camera and microphone connected to your device* A device with a display, e.g. Laptop, Chromebook, iPad, Desktop

An email with the link to join Zoom and any further information will be sent to you by the Australian Museum at least one week before your session.

A tax invoice based on Final Confirmation details will be issued prior to your visit or session.
Please advise at the time of booking if the tax invoice needs to be issued to a different contact name or email address. NSW Department of Education schools that use the EDConnect payment system should advise this at time of booking and provide a purchase order number if required.
Our payment terms are nett 14 days. However, it is the AM’s strong preference that bookings be paid in full prior to the visit.
Adjustments on the day – the AM will adjust the invoice amount and you must pay the difference where:i) Group numbers increase from Final Confirmation numbers; orii) the Group changes to a more expensive booking/ticket.
The adjusted invoice payment terms are nett 14 days. To be clear, where numbers are less thanFinal Confirmation numbers, no deductions or refunds will be given.

Any changes to numbers or cancellations must be made in writing by emailing [email protected] before the date for Final Confirmation (14 days prior to your visit).
Sessions require a minimum of 20 students to go ahead. While we make all attempts to combine schools to reach the minimum, we may cancel sessions if this minimum number cannot be reached.