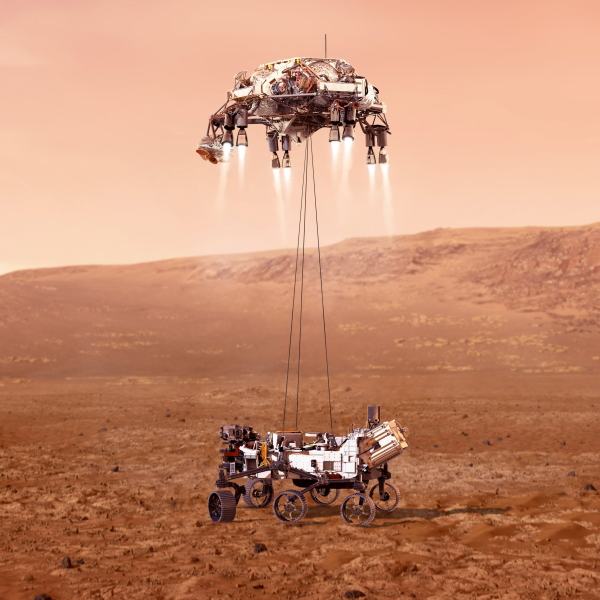 Meet the Australian Deputy Program Scientist, Dr Adrian Brown of the Mars 2020 mission that is exploring our neighbour, Mars. Perfect for those learners curious about investigating our Solar System.

This webinar was recorded live on 11 March, 2021 and is now available to view anytime via a YouTube recording. A link to the webinar recording will be sent after you book your place. Suitable for learners in Years 4 to 8.

After 6 months and a journey of 480million km, Mars2020 and its rover Perseverance, helicopter explorer Ingenuity, landed, enduring the ‘7 minutes of terror’ and are already sending back images. What will they find and what is next for these robotic explorers and the Earth based team of scientists, engineers and space pioneers including the Deputy Program Scientist, Dr Adrian Brown from Western Australia?

This is the 16th mission to our neighbouring planet, so we must ask why? What is it about the red planet that draws us like moths to a flame. What would we do if NASA finds evidence of life in the past and what does the future of robotic exploration hold for young STEM learners in Australia? Will interest in Mars fade after the recent discovery of the ‘life suggesting’ chemical phosphine in the atmosphere of Venus? Suitable for school and home-school learners from upper primary through to Year 8.

BROUGHT TO YOU BY: Powerhouse

Dr. Adrian Brown is currently working as a planetary science researcher at the NASA Headquarters in Washington D.C. in the United States of America. Adrian has a background in computer science and electrical engineering – his first degree was in Electrical Engineering from the Australian Defence Force Academy in Canberra, Australia.
After completing his PhD, Adrian was selected as a 2006 NASA Postdoctoral Scholar at the NASA Ames Research Center in Mountain View, Calif. Adrian then became a research scientist at the non profit SETI Institute where he conducted planetary science research, primarily on Mars using the CRISM instrument on NASA’s MRO spacecraft. While at the SETI Institute, Adrian ran the research and public SETI Seminar series and was the program chief for the SETICON II convention.
In 2015, Adrian moved to the East coast and has since taken up his current role at NASA Headquarters in Washington D.C.

This webinar was recorded live in March 2021 shortly after Perseverance landed on Mars. After you book your place, a link to the recording will be sent to the email you have registered with.